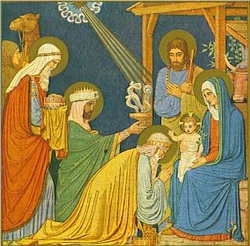 What? "The Epiphany of Our Lord" is the festival day that remembers the coming of the wisemen to worship Jesus.  They found Jesus by following a star which led them to Him.

Why? The Epiphany was the first time Gentiles (non-Jews) came in faith worshiping Our Lord.  It teaches that Jesus is the Christ (anointed Saviour) of not merely the Jewish people, but of ALL people.

Epiphany? Epiphany means "to show forth" or "to reveal".  When some new insight hits someone they may say, "I had an epiphany," as if some new thing had been revealed to them.  Jesus' epiphany by God through a star to these foreigners shows that He is the saviour of all the world.

Magi? This word, used in the Bible for the men who came from the East, is the word for the priestly wisemen at the top of Persian/Bablyonian society.  As advisers to their king they would likely have been familiar with the writings of various religions and may have sought answers to the meaning of the star they saw in those writings.  Babylon had conquered the Jewish people some 500 years earlier, and a community of Jews had been there with their Scriptures since that time.

3 Wisemen?  There were three gifts, but no number mentioned of how many wisemen.  The kingly gifts they gave (gold, frankincense, myrrh) may have required more than three of these magi in order to afford them.

3 Kings?  There is no indication that these men were kings apart from the fact that they brought gifts associated with kings, and magi were the upper crust of Babylonian society.

Why are the kings depicted as being from Asia, Africa, and Europe?  The top picture depicts a Middle Eastern king, a European king, and an African king coming to worship the new born king, Jesus.  This is because, as the first non-Jews to come to Our Saviour in faith, they represent all the peoples of earth.